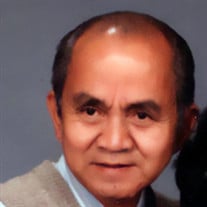 Robert Aposaga Andal was born on Thursday, March 1, 1928 in Honolulu, Hawaii. Robert was born to Nicolas & Felisa Aposaga Andal. His siblings were Herman, Luisa, Judy, and Rudy. During his childhood, his parents returned their family back home to the Philippines. They settled in the Canlubang barangay in Calamba, Laguna, Philippines. In the Philippines, he met his beloved wife, Socorro Nadres. They were married on December 30, 1978. They then moved to Vallejo, California, United States in 1979. There, they raised their three sons: Herbert, Eric, and Glenn. He also became a grandfather to a beloved granddaughter, Rebecca Sofia, the daughter of Glenn. Robert was a longtime, faithful servant of Jehovah God. Upon studying with Johnny Peralta in the Philippines, Robert was dedicated & baptized as one of Jehovah’s Witnesses on February 8, 1969. His love for Jehovah, the Bible, and the people he preached its message of hope to led him to become a Regular Pioneer in 1999. He remained in full-time ministry even in his later years, as an infirm pioneer. Many in the Downtown and Fleming Town Plaza areas of Vallejo became familiar with Robert, as he frequented those areas in his ministry. Even store workers and donut shop owners became accustomed to his regular warm greetings. Robert was a man of humor, creativity, integrity, and love. He had a wonderful sense of humor and he also loved to share stories. And he constantly read his Bible in undertone, day and night. Robert fell asleep in death on Tuesday, April 26, 2022. Until the very end, his faith was strong. He knew that one day soon, he would be together with his family, enjoying everlasting life on a paradise earth

Robert Aposaga Andal was born on Thursday, March 1, 1928 in Honolulu, Hawaii. Robert was born to Nicolas & Felisa Aposaga Andal. His siblings were Herman, Luisa, Judy, and Rudy. During his childhood, his parents returned their family back home... View Obituary & Service Information

The family of Robert Asposaga Andal created this Life Tributes page to make it easy to share your memories.

Send flowers to the Andal family.