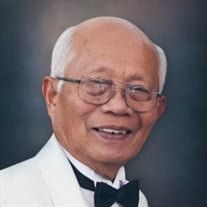 Ricardo F. de los Santos, Sr. “Papang/Ric/Cardo”, 93, passed away peacefully on November 9, 2021, from a short illness, surrounded by his family. He was born February 29, 1928, to Antera Fernandez and Domingo de los Santos in Santiago, Isabella, Philippines. “Papang” attended elementary school through college at Northeastern Institute where he earned his Associates of Arts degree and Bachelor of Science degree in Education and where he met the love of his life Leonila Andres. They married on January 7, 1953 and had 7 children. On October 23, 1968, Papang migrated to the United States. All he had was $100 cashiers check and a dream for a better life for his family. He first moved to Vallejo but quickly moved to San Francisco when he realized most of the work was in that area. His family followed him to the US a year later. He did odd jobs from working in the printing press to selling pots and pans, and he was a car salesman and also a courier. In 1984, he moved to Concord and opened delos Santos Board and Care. In 1989 when the courier service closed down he decided to open his own service and call it 229 Omega Courier Services. He moved back to Vallejo in 2010 and retired in 2013 at age 85. Papang’s most cherished blessing was a family spanning four generations he called his legacy. He is survived by his wife Leonila, daughters Carmen, Lynn (Bruno), and Razel (Marlon), sons Lee (Cita), Leonardo-deceased, Ric Jr-deceased (Pema), and Uly (Hilda), 15 grandchildren (Joyce, Marco, Jerik, Jay Rold-deceased, Jeremy, Adrienne, Brian, Krystle, Chaena, Miriam, Shari, Joseph, Jazzy, Marizel, and Jenna), and 17 great grandchildren (Lexi, Marco Jr, Marcus, Xiara, Devin, Sofia, Marilyn, Chloe, Isaiah, Matthew, Brendan, Lyla, Madden, Morgan, Dominic, Rowan, and Calvin). He was a devout Methodist, a loving husband, father, grandfather, and great grandfather. He attended church every Sunday with his wife. If he could not make it to church in person, he would watch it on TV. His favorite past times were watching the SF Giants, 49ers, and Warriors, gardening, and cooking. He loved family gatherings and parties, going to the casino, and treating his family to breakfast and dinner. Papang lived a long and beautiful life full of love and laughter. He will be missed dearly but his legacy will live forever. Visitation will be held at Skyview Memorial, 200 Rollingwood Drive, Vallejo on Monday, November 22, 2021 from 4:30pm-7:00pm. His funeral will be Tuesday, November 23, 2021 at Wayside United Methodist Church, 2309 Columbus Pkwy at 11:00am.

The family of Ricardo F. de los Santos Sr. created this Life Tributes page to make it easy to share your memories.