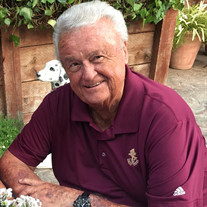 Michael James Coakley, 86, passed away on Wednesday July 21st with his loving wife, Carmela, and family at his side. He passed exactly one week after coming home from a two month stay in hospital with a Hemorrhagic Stroke. Mike was born in Sacramento CA. to the late James and Gertrude Coakley. He moved to Benicia at a young age, and graduated Benicia High in 1953. Mike was well known for his humor, his one liners and being the funniest guy in the room. If you were his friend, you were his friend for life. Mike joined Pacific Bell Telephone in 1955 in Vallejo, starting as a splicer, and worked his way up into management. He was moved from the Vallejo office to Napa, Tracy, South Lake Tahoe and ultimately as Manager of the Business office in Fresno CA. where he retired after a 30 year career. Not only was Mike active in the United Crusade for several years, he went on to become Chairman of more committees and campaigns than possible to name. He belonged to several local clubs and organizations in every city he lived in, and enjoyed often being Master of Ceremony. After retiring, he returned to Vallejo when he took a job in Telecommunications for Cal-Fed Bank. He later married his wife Carmela, often saying he found the love of his life. When he left Cal-Fed he became a Property Manager for Cirimele & Assoc. then later for Buck Kamphausen Evergreen Properties. He loved the interaction with community, and always said he’d continue to work till he couldn’t anymore. And he did just that. Intertwined was his immense love of Golf, playing at many courses throughout CA. He was President of Blue Rock Golf Course. And was also President of Solano County Fairs, and continued as an active member. He is survived by his wife, Carmela, his sons Michael Coakley Jr. Todd Coakley, and Rick Robben (Tami) His daughter, Gina Leigh (Bill Trujillo). Grandchildren Ryan, Trey and Kayla Coakley. Ricci Thompson, Jacob Robben-Coakley, Alex Coakley, Baylee and Dalton Robben. Tawny Aiello, Vincent Trujillo. And five Great-grandchildren. His sisters, Sharon Cole, Cathy Fagan and Mary Kashani. Viewing will be at Skyview Memorial, Tuesday, August 3rd from 3:00 to 5:00 and Vigil at 5:00 Funeral Mass at Saint Basil the Great, Wednesday, August 4th at 11:30 Reception to follow USA World Classic Car Museum

Michael James Coakley, 86, passed away on Wednesday July 21st with his loving wife, Carmela, and family at his side. He passed exactly one week after coming home from a two month stay in hospital with a Hemorrhagic Stroke. Mike was born in... View Obituary & Service Information

The family of Michael James Coakley created this Life Tributes page to make it easy to share your memories.

Send flowers to the Coakley family.