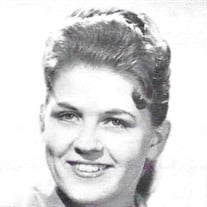 Feb. 11, 1938 – March 28, 2022 Jill Ledebur Mills of Vallejo went home to be with her Lord on March 28, 2022. She was preceded in death by her husband, George F. Mills Sr., her parents, Clinton W. and DenceyAlice (Noxon) Ledebur and her step-son: George F. Mills Jr. She is survived by her step-children: Connee L. Carlson and Julie A. Hofferber; by her step-grandchildren: Michelle Tileston and her husband Charley, Clint N. Carlson and his wife Sarah, Susie Ann Rasnick, Barbara Jean Rasnick and James M. Rasnick; three great step-granddaughters: Rachel, Lily and Madalyn Carlson; her brother, Larry C. Ledebur and his wife Susan Whitelaw; by her nieces Kathryn Ledebur and Lara Jill (Ledebur) Sprenger; and by great-niece Elisa Meruvia, and great-nephews Nicholas Radley, Christopher Radley, and Sebastian Reineke. Mrs. Mills was born in Taylor, Texas, and was raised in Midland and San Antonio, Texas, where her father was in the oil industry. She graduated with a Bachelor’s Degree from Austin College in Sherman, Texas. She worked for several years at Lackland Air Force Base in San Antonio as a teacher of English as a foreign language to contingents of military trainees from Thailand. She later spent several years in Thailand at a U.S Air Force Base where she continued to teach English to Thai military personnel. Upon returning to the U.S., she married George Mills. They moved from Texas to Vallejo, California where George worked in the auto repair business. They made their home in Vallejo where they lived for the rest of their lives. Mrs. Mills was a devoted Christian and a dedicated and long-time member of the Community Bible Church of Vallejo. She enjoyed reading British mystery novels, collecting and sharing recipes, good food, NFL football and, most importantly, Jill was faithful in prayer for those she loved. She always prayed specifically, (desiring all the details) for God’s will and “the best and highest” for the people involved. She died at Kaiser Permanente Medical Center in Vallejo after a short illness. Mrs. Mills will be interred at Skyview Memorial Lawn, 200 Rollingwood Drive in Vallejo on May 6th at 3:00pm. A memorial service will follow at a later date. She will be buried next to her husband at that cemetery. “GOODNESS and MERCY FOLLOWED HER ALL THE DAYS OF HER LIFE”

The family of Jill L. Mills created this Life Tributes page to make it easy to share your memories.

Send flowers to the Mills family.