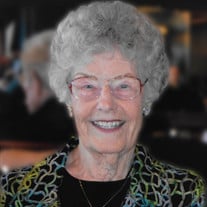 Elk Grove, CA - Eva Mary Struble Johnson, 92, passed away unexpectedly yet peacefully following a brief illness, surrounded by family at her daughter’s home. Born December 2, 1928, to Lester and Margaret Struble in Milwaukee, WI, Eva had the interesting opportunity to live in a lighthouse where her father was the lighthouse keeper in Port Washington, WI. The family moved to Vallejo, CA, in 1941. She graduated from Vallejo High School and Vallejo Junior College and was active in school government. Unbeknownst to her family until recently, she was accepted to UC Berkeley but chose to marry and raise a family. In the summer of 1948, Eva took a summer job at Yellowstone National Park where she met Bob Johnson from Seattle, WA. They married in 1950 in Vallejo and made their first home in Seattle. They had three children, and the family moved to Napa in 1958 where Eva was a homemaker. Following a divorce, she went to work at Queen of the Valley Hospital in Napa in the early 1970s as a central supply technician. She enjoyed her job, made lifelong friends, and retired after 20 years. Caring for her family was her priority, so after retirement she cared for both her parents until their passing. In 2005, Eva had her son Mark build a beautiful home on his property in Vacaville. After 10 years in her Vacaville home, she moved to Elk Grove to be closer to her daughter. Eva’s love of winter sports was evident through her ice skating and skiing. She took every opportunity to do both. Mountains were her favorite scenery so she traveled to the Canadian Rockies, Grand Tetons and Sierra Nevada. Eva enjoyed cruises and took several Alaskan trips with her daughter, Nancy, and niece, Heidi. She cruised to Hawaii with Heidi and the Panama Canal with her brother, Tom. Eva received numerous awards while in high school for her art, and her love for creating art continued throughout her life. Watercolors were her favorite medium, and we are fortunate to have many of her works. Eva was an avid knitter, creating intricately patterned baby blankets for relatives and friends. She knitted baby hats for a local hospital and sweaters for disadvantaged children in Appalachia. She knitted red, white, and blue lap blankets for US veterans through the Veterans Administration. Eva was always there for her family. She never missed a baseball game, football game, horse show or school activity. Her grandchildren and great-grandchildren were fortunate to know her and to know how much she enjoyed their activities. She was preceded in death by her parents, Lester and Margaret Struble, and her brothers Tom and Richard Struble. She is survived by her children Mark Johnson (Linda), Nancy Sarmento (Craig), and Dan Johnson (Judi), three grandchildren and five great-grandchildren. Private family services are planned. Eva will be interred with her parents at Skyview Memorial Lawn in Vallejo. Donations in her honor may be made to the Napa Valley College Foundation for the Richard Struble Memorial Art Scholarship. Contact the foundation office at 707-256-7170 for further assistance.

The family of Eva Mary Johnson created this Life Tributes page to make it easy to share your memories.

Send flowers to the Johnson family.