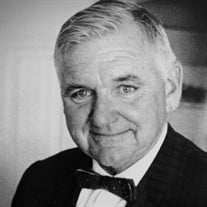 Edward Fox (1921-2020) Edward (Ted) Fox, 99, passed away June 23, 2020, at his home in Vallejo. Ted was born in Wakefield, England and immigrated to the United States at the age of four. He grew up in Patchogue and Port Jefferson on Long Island, NY, and graduated from Amityville High School. He attended Transylvania University in Kentucky. He married Nathalie Smith in 1942 and raised 4 daughters. Ted joined the Army Air Corps and became a pilot and flight instructor. He served in WWII, the Korean Conflict and the Vietnam War. He flew a wide variety of cargo aircraft throughout his career including the B24 Liberator, C46 Commando, C47 Skytrain, C53 Skytrooper, C54 Skymaster and the C133 Cargomaster. During WWII he bravely "Flew the Hump" carrying mostly fuel over the eastern end of the Himalayas from India to China, often in severe weather and without reliable charts and radio navigation aids. He retired from the USAF in 1967 and purchased and operated the Napa Val Fishing Resort at the southwest end of the Sears Point Bridge in Vallejo. He remained in Vallejo until 2003 when he married Janice Eggerman and moved to Sun City, Roseville. He returned to Vallejo in 2018 and resided at the Vallejo Hills Retirement Community. Ted was preceded in death by his parents Bert and Madge Fox, his first wife Nathalie Fox, his daughter Barbara Kondylis, and his cousin, actor Bernard Fox. He is survived by his wife Janice Fox, daughters Pamela La Mar, Terry (Larry) Rogers, and Janet Fox; son-in-law Gabriel Kondylis; grandchildren Nathalie (Ryan) Manning, Alex (Jennifer) Kondylis, Jason (Rhonda)LaMar, Emily (James) Holland, and Marcella (Jenni Davis) Ramirez; and great-grandchildren Katharine Manning and Andrew Manning. Ted loved his family and friends, dancing to Big Band music, hosting parties, cruising, wearing his signature Aloha shirts, swimming, gardening, and the companionship of dogs. His family wishes to thank his wonderful caregivers including Dr. Michele Herman of LaClinica, the ER and sixth floor staff of Sutter Vallejo Hospital, Sutter Home Health Care, ComForCare Home Care, and the staff of Vallejo Hills Retirement Community. In light of the COVID-19 virus, no services will be held, but all are encouraged to listen to Ella Fitzgerald and Frank Sinatra and reflect on Ted’s long and happy life and his dedicated service to our country.

Edward Fox (1921-2020) Edward (Ted) Fox, 99, passed away June 23, 2020, at his home in Vallejo. Ted was born in Wakefield, England and immigrated to the United States at the age of four. He grew up in Patchogue and Port Jefferson on Long... View Obituary & Service Information

The family of Edward Maynard Fox created this Life Tributes page to make it easy to share your memories.

Send flowers to the Fox family.